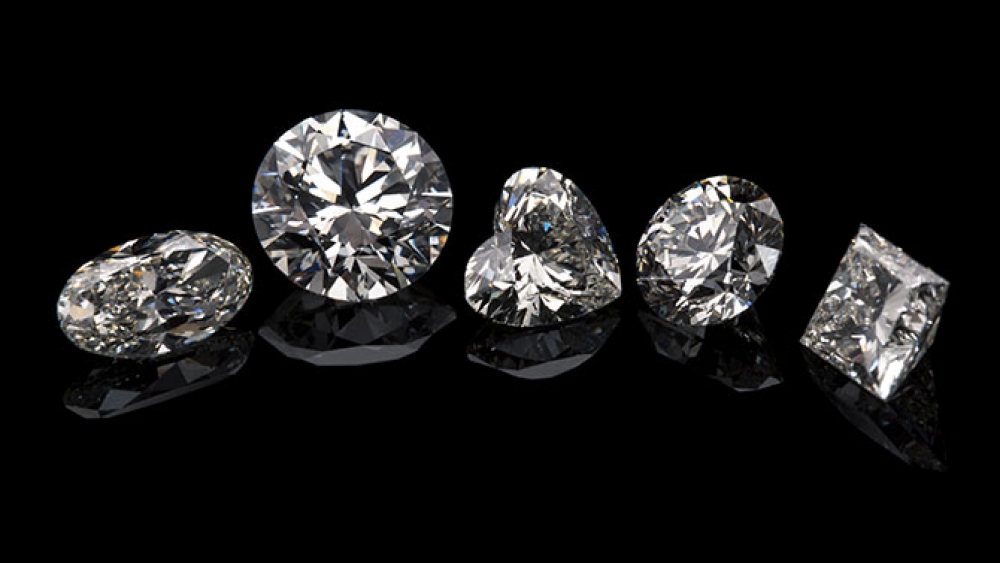 Diamonds come in many different colours and shapes, and rarely go out of style. They are a sign of wealth, luxury and perfection. While we all know the classic round brilliant cut, there are many other diamond shapes that are also very popular. Each shape has different characteristics and express a certain style. A person who is very traditional and conservative might opt for a beautiful round diamond, while someone creative and unconventional prefers something more special such as a pear- or emerald-shaped diamond. What are the most popular diamond shapes? Uniglo gives you a clear overview of the 5 most beloved diamond shapes and their characteristics.

The most popular diamond shape is still the iconic round diamond, it makes up for about 75% of diamonds sold worldwide. When choosing a round diamond, the cut is the most important factor of the 4 C’s, as it determines how the light will reflect, which gives the brilliance and fire to the diamond.  An excellent and a very good cut will be the most beautiful and give the most sparkle, especially important if the diamond is used as a centre stone. With a specific cut and a total of 57 facets, established by Marcel Tolkowsky in 1919, it maximizes the brilliance, sparkle and fire of a diamond.

The second most popular diamond shape is the bold Princess cut, a diamond with a lot of brightness and a more unconventional shape than the round diamond. It was first created in 1981 by Betzalel Ambar and Israel Itzkowitz.  The most distinguished feature of the princess cut is the square look, beautiful as a centre stone on an engagement ring or to adorn stud earrings.  The shape can be described an un upside down pyramid, with a large table. While the number of facets and the faceting arrangement can vary widely, the square shape is always present.

In comparison to a round diamond of the same carat, a princess cut is about 40% cheaper. This is due to less diamond ore waste during the cutting process, and two princess diamonds can be cut from one diamond piece.

Third in the popularity list is the cushion cut diamond. Its shape can best be described as a rectangular or square shape but with rounded edges, something between a round and a princess cut diamond. The name is derived from what it actually looks like: a pillow.

Whilst this shape has been around longer than the round and princess cut, it lost in popularity since the other shapes were created. It still, however, stays at a solid third place in popularity.

The original, or classic, cushion cut is called an (old) mine cut, it has since then been revised many times over the years to maximize its brilliance. Originally, in the 19th century, the (old) mine cut was a square diamond with round corners and a total of 58 facets, the current modern, or modified, cushion cut has 64 facets and adds more brilliance to the stone. There are different style and ratios for both the traditional and the modern cushion cut.

Famous cushion cut diamonds are The Hope Diamond and the yellow Tiffany Diamond.

The cushion cut diamond, such as most fancy cuts, is less expensive than a round diamond. The price is influenced by the different characterises, or 4C’s, of a particular diamond.

Next is the emerald cut, a rectangular shape stone with linear facets, a large table and cropped corners. The term emerald cut was first used in the 1920s, however the cut already existed a long time before that. With a vintage Art Deco feel to it and a very elegant appearance, the emerald cut has the ability to make your finger look much slimmer. Additionally, the emerald cut looks much bigger than another diamond shape in the same carat weight. This is due to its specific shape, clean lines and symmetry.

However, the emerald cut gives less brilliance than a round shapes diamond for example, and the colour grade is much more prominent. A stone with a colour graded I looks much more yellow than the same grade on a princess cut diamond. Inclusions are also more noticeable in emerald cuts, due to the large table facet.

The emerald cut, just like the princess and cushion cut has a lower price per carat compared to the all-time favourite round diamond.

Fifth place is the pear-shaped diamond, this cut was originally created in the early 1400s by Lodewyk van Berquem in Belgium. Although it wasn’t popular at that time, today it’s a very popular cut chosen to adorn an engagement ring. The teardrop shape, one end looking like a round diamond while the other end resembles a marquise diamond, has a slimming effect on the finger. The narrow, marquise-looking, tip should be worn towards the end of the finger for the best look.

One of the advantages of a pear-shaped diamond, is that thanks to the shape, it looks bigger than the same carat round diamond. Additionally, it’s about 10 to 30% less expensive than a round diamond, great for people wanted to spend a little less.

A pear-shaped diamond might look incredible, but it’s actually very difficult to find one with a good cut and symmetry. Because there is no fixed length to width ratio, it’s a matter of availability and personal preference. However, we recommend choosing a pear-shaped diamond with a length to width ratio between 1.45 to 1.75 with an excellent or very good cut and symmetry.

Finally, the tip of the diamond might be fragile and should always be set with a prong at the end to make sure it’s safe and secure for years to come.

While those are the 5 most popular diamond cuts, there are a lot more options for you to choose from. Are you interested in one of shapes mentioned above or another? Don’t hesitate to contact us or take a look at our online inventory.

Have you seen our other blog posts?