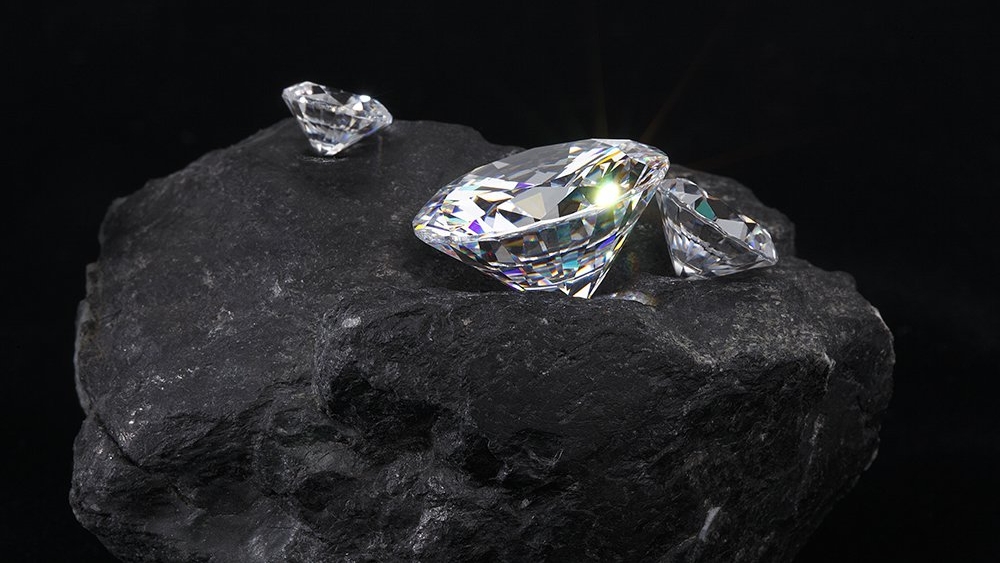 Diamonds are beautiful gemstones used for jewellery and industrial appliances. They are known all over the world and although being quite small, are of great value. They look absolutely perfect, it’s almost hard to believe that diamonds have been naturally made about 1 to 3 billion years ago. The process of how diamonds are formed is fascinating and they go through many different stages before being used on jewellery. Many decennia later, in 1954, scientists have eventually found a way of recreating the same stone in a laboratory. Although a natural and a lab-grown diamond have been made in 2 very different ways, both have exactly the same characteristics.

How are natural diamonds formed?

Natural diamonds have been formed 1 to 3 billion years ago within Earth’s crust. They were made in the Earth’s mantle, a layer separating hospitable exterior from the molten core, about 160 km deep. The extreme heat and pressure in this layer modifies graphite, a crystalline carbon, on an atomic level. The carbon composition transforms from a hexagonal sheet pattern into a triangular shape, resulting in a diamond.

The crystallized carbon, now being a rough diamond, still has to come out closer to the surface for people to mine them. The magma within the Earth’s crust, about 150 to 200 km deep, is under high pressure and heat which causes it to erupt. It’s being forced to the Earth’s surface, taking the diamonds along with it. Once this magma cools down it settles in vertical pipes, commonly known as Kimberlite Pipes.

The first diamond is allegedly discovered in India in 4th century BC and was seen as a gift of God and a sign of wealth, health and strength. Today, these values are still associated with diamonds and other gemstones.

Earth, however, seems to be only one source of diamonds. It is by far the main source, but meteorites have also been known to deliver diamonds. The fourth most common element in the universe is carbon, so it doesn’t really strike as a surprise that diamonds can be formed there as well. Scientists believe, after examining diamonds found in meteorites, that these would have been made on another planet that was destroyed a long time ago.

How are coloured diamonds formed?

Coloured diamonds have essentially followed the same path as regular, colourless diamonds, but have encountered other gasses, minerals or materials while being formed.

Red and pink diamonds have absorbed green light whilst being buried deep within Earth’s crust. In contrary to what you might believe, the green light reflects as a pink hue, which can also be deeply intense, creating a very rare red diamond. The presence of boron, a chemical element appearing in the Solar System and within the Earth’s crust, is responsible for the colour of grey and blue diamonds. Green diamonds owe their colour to the naturally occurring radiation present in the upper layer of Earth’s crust, which they pass on their way to the surface. One of the most popular coloured stones are yellow and orange diamonds, they owe their colour to the presence of nitrogen.

How are lab-grown diamond formed?

Natural diamonds were made many years ago and are becoming scarcer every minute. Being constantly mined, manufactured and sold, diamonds will eventually run out. Luckily nowadays technology marches on, also when it comes to diamonds. After years and years of analyzing where diamonds came from, how they were made and their characteristics, scientists were able to figure out how to recreate diamonds. Lab-grown, synthetic or man-made diamonds are made in a laboratory and takes about 6 to 10 weeks.

As the name reveals, high pressure and high temperature are used for this method. A diamond seed is placed into a piece or carbon, which melts under these extreme circumstances, leading to a larger diamond forming around the original diamond seed. Finally, the new formed diamond will be carefully cooled.

A small diamond seed is placed in a sealed space, which is then heated to very high temperatures and filled with gasses such as methane and hydrogen. These gasses are rich in carbon. Being subjected to the extreme heat and a technology similar to lasers, the gasses are ionized, and pure carbon starts to stick to the small diamond seed.

To match certain colour expectations, the diamond may then be additionally treated to change or enhance the colour. The CVD method usually takes about 1 month to form a diamond.

What’s the difference between natural and lab-grown diamonds?

Although both type of diamonds are made under entirely different circumstances, it’s almost impossible to see the difference between both diamonds. An experienced gemmologist will be able to determine which is the natural and which is the lab-grown diamond by using specific devices. It is, however, impossible to tell both apart just by looking at them.

Would you like to know more about the differences between natural and lab-grown diamonds? We have written another blog article about this particular subject.

Now that we’ve explained how natural, colourless and coloured diamonds, and lab-grown diamond are formed, you might want to know even more about diamonds. What techniques are used to cut diamonds or what are the most important diamond mines in the world? You can find these articles, and many more, on our Uniglo Diamonds blog page.

Are you interested in purchasing a diamond? View all the availabilities in our inventory page.